Driving while “buzzed” is an increasing problem in the U.S. In 2009, the National Highway Transportation and Safety Administration (NHTSA) found that 18% of all drivers involved in a fatal car accident were high on some kind of drug. In 2014, the Substance Abuse and Mental Health Services Administration (SAMHSA) estimated that 10.1 million Americans (4.1%) were driving while under the influence of drugs like marijuana

These statistics were compiled before many states legalized medical or recreational marijuana so that 4.1% figure is no doubt much higher.

Like alcohol, however, if a driver has consumed too much of any drug, even if legal in many states, and they hit your vehicle or strike you while you are legally crossing the street, they can be sued for personal injuries.

If you have been involved in an accident with a vehicle, and you believe that the other driver was under the influence of marijuana, you should contact an experienced personal injury lawyer immediately.

Delaware’s Law About Driving a Vehicle While High on Marijuana

Driving under the influence basically means that the presence of alcohol or a drug in the driver’s blood system makes them incapable of driving safely.

Determining if someone who’s been in a car accident is under the influence of drugs can be more difficult.

In July 2017, the NHTSA reported to Congress that it can be difficult to determine if someone’s driving is impaired by using legal or illegal drugs. It’s easier to assess the usage of some kinds of drugs than others. Cocaine, for instance, only stays in the body for a day or two, but marijuana may linger in the body for as long as a month.

Delaware’s approach to this problem is “per se” drug driving laws. Basically, if a motorist that police believe is under the influence of drugs, receives a blood or urine test and that test shows any detectable amount of marijuana in their system, they are charged with Driving Under the Influence (DUI). Delaware is one of 15 states that uses the per se drug law and one of 12 that has a zero-tolerance policy.

What If a Driver Hits Me While High?

If you have been involved in a vehicle accident and you suspect the other driver is under the influence of marijuana, there may be signs that can help confirm your suspicions.

First, if a driver has been smoking marijuana while driving, you will likely be able to smell marijuana smoke on their person or in their car.

Other signs that a driver is operating under the influence of marijuana include:

If you’ve been in a car accident and you suspect the other driver is under the influence of marijuana, call the police immediately. There are several reasons for this.

At the accident scene, if you are not seriously injured, it’s best to gather evidence from afar:

What to Do If You See Them Dumping Their Stash

If the other driver tries to destroy or remove evidence such as a stash of marijuana, use your smartphone to record them doing so, but do it from a safe distance.

Probable cause for a police officer to determine if a driver was under the influence of marijuana includes:

If any of these conditions exist, this gives the police probable cause to test for impairment.

How Do You Prove That Someone Was Driving Under the Influence of Marijuana? 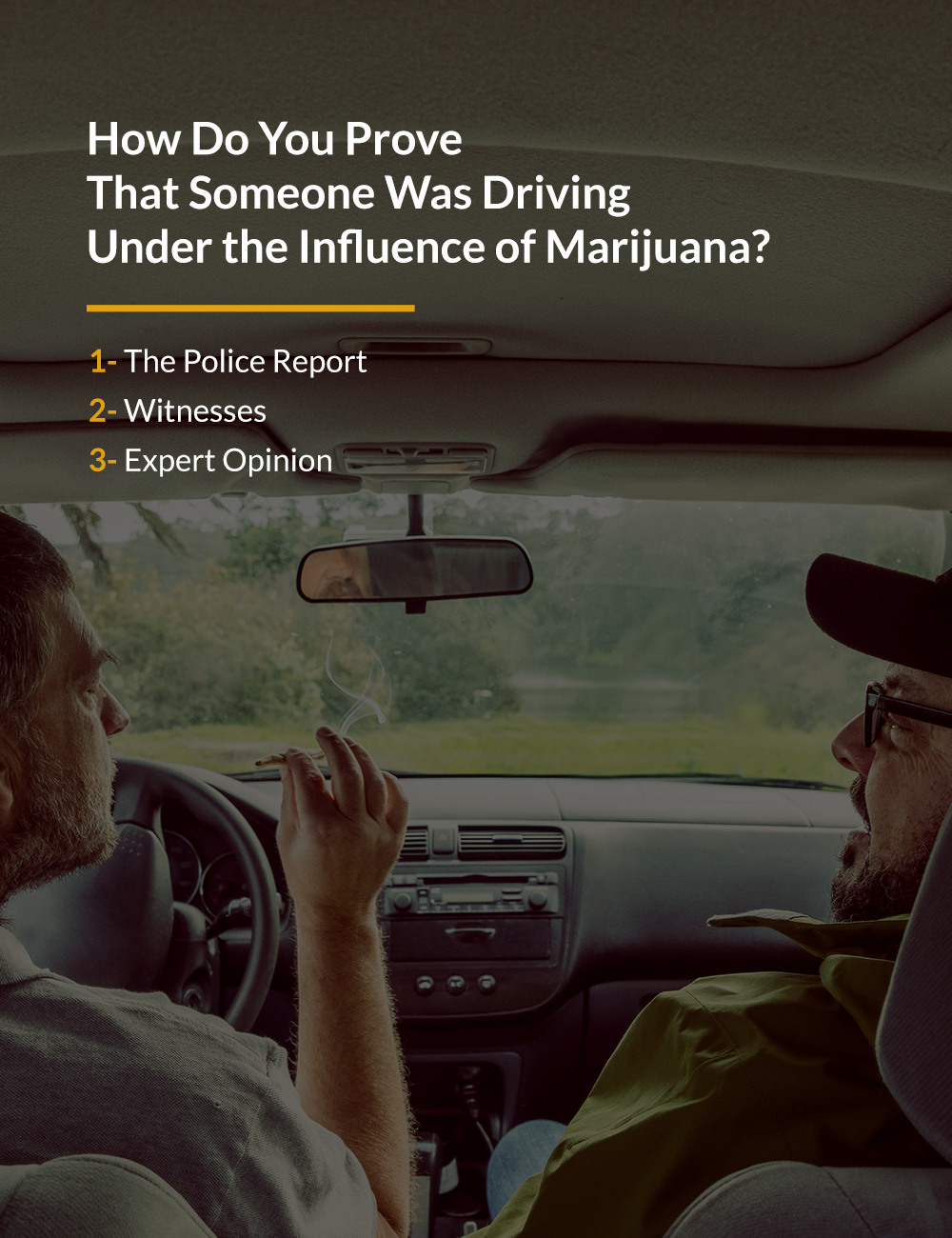 If you file a personal injury claim against the driver that you suspect was impaired by marijuana use, your lawyer will look at several important factors:

This is why it’s important to call the police if you suspect the other driver is impaired by marijuana. When the police come to the scene of an accident involving an impaired driver, they will prepare an accident report in which they may state that they believe that the car accident was caused by a driver smoking marijuana.

Your lawyer may consider testimony and accounts from witnesses as to what they witnessed about the behavior of the other driver. They might get these witness accounts from police reports or from the notes you took at the scene. Perhaps, they saw them fall or noticed that they were acting combative. They may have observed that their speech was mumbled or slurred or smelled the odor of marijuana either coming from the driver’s car or on the driver themselves.

Your lawyer can call on medical or law enforcement experts who can testify as to how the other driver performed using standard sobriety tests, such as walking a straight line or standing on one foot. These experts may also testify about the results of any blood or urine tests that indicated the presence of marijuana.

Recovering Compensation From the Impaired Driver

When it comes to auto insurance, Delaware is an “at fault” or “fault” state. So if a driver under the influence of marijuana has hit your car and you have been injured, you have two means of recovery:

Normally, damages in automobile accident lawsuits include compensation for:

Typically, punitive damages are not awarded in automobile accident lawsuits. However, if you are struck by a DUI driver, your attorney may be able to argue for punitive damages based on the fact that the driver was impaired, as this may indicate a level of wanton or willful conduct. In Delaware, there is no set rule for determining punitive damages. Instead, a jury awards them on a case-by-case basis

For instance, say you were struck from behind by a marijuana-impaired driver, and during the trial, it’s discovered that your taillights had burnt out. The defendant’s attorney may be able to argue that you are partially to blame because you didn’t get your taillights fixed. If the judge or jury decides that you are 20% responsible for the accident and you are awarded $100,000, you would only be able to collect $80,000.

What If They Were Using Medical Marijuana?

It also states, “Nothing in this chapter shall be construed to prevent the arrest or prosecution of a registered qualifying patient for reckless driving or driving under the influence of marijuana where probable cause exists.”

So, if a driver who smoked or ingested medical marijuana got into a car accident, they could be cited for a DUI. In fact, when someone is taking any legal or illegal drug that could impair their ability to drive a car, and they are involved in a car accident or pulled over by the police, they can be charged with a DUI.

Perhaps the best-known example of this concerned the golfer Tiger Woods. He was asleep in his parked car when state police checked it. Woods was incoherent, and when police questioned him, he was not even sure of where he was. It turned out that he had taken too many of the drugs prescribed for his back pain at the same time.

Woods was eventually sentenced to one year on probation, but if he had been involved in an accident at the time, he would’ve been liable for any damages. The same is true of any driver in Delaware who operates a vehicle while under the influence of marijuana, even if they have a medical marijuana license.

When it comes to marijuana use and accident liability in Delaware, this suggests that someone could be held responsible for damages they caused while driving under the influence of marijuana, even if they have a medical marijuana license.

If you’ve been in a car accident, you’re likely to be “under the weather.” The last thing you need to do is to spend time hunting down witnesses and documentation to prove your case when you should be doing your best to recover from your injuries.

That’s why you should speak with the Morris James Personal Injury Group. Our knowledgeable attorneys have over 150 years of combined experience in dealing with personal injury accidents. We help our clients receive full and fair compensation. We know the kind of tricks used by insurance adjusters and attorneys for the impaired driver who hit you, and we know how to counter them.

If you have been in an accident with a DUI driver, talk with one of our knowledgeable attorneys today. We have several offices in Delaware where you can reach us:

You can also reach us via our contact us page where you can leave us details on how we can get a hold of you and tell us about your case.