In the United States, more than 3 million people are injured in car accidents every year. Delaware has a share of these accidents, with more than 28,000 crashes and 8,161 people injured in 2018.

Any accident can be jarring for everyone involved, but it can be especially confusing for passengers. Often, passengers don't know their legal rights and are unsure about their insurance. After a crash, it can be difficult to know who pays for injuries as a passenger in a car accident. Passengers often wonder whose insurance should cover their injuries. Is it the insurance covering the driver of the car they were in, or the insurance of the driver of the other car? Maybe it's the passenger's insurance.

Are Passengers Covered by Car Insurance?

Often, when a passenger’s medical expenses exceed the amount of money the driver’s plan offers, they may be able to can make up the difference under their own policy depending on the language of their policy.

For passengers who don't have car insurance, they are still entitled to the $15,000 from the driver's insurance for PIP coverage, but they will have to make a claim for the extra amount of money they spent on medical bills. Due to the comparative fault system, the passenger who has exhausted their coverage options can make a claim with the at-fault driver's insurance company, seeking the rest of the funds for their medical treatment and recovery, along with personal damages.

If you were a passenger in a car where the driver was responsible for the accident, you'll have certain rights. 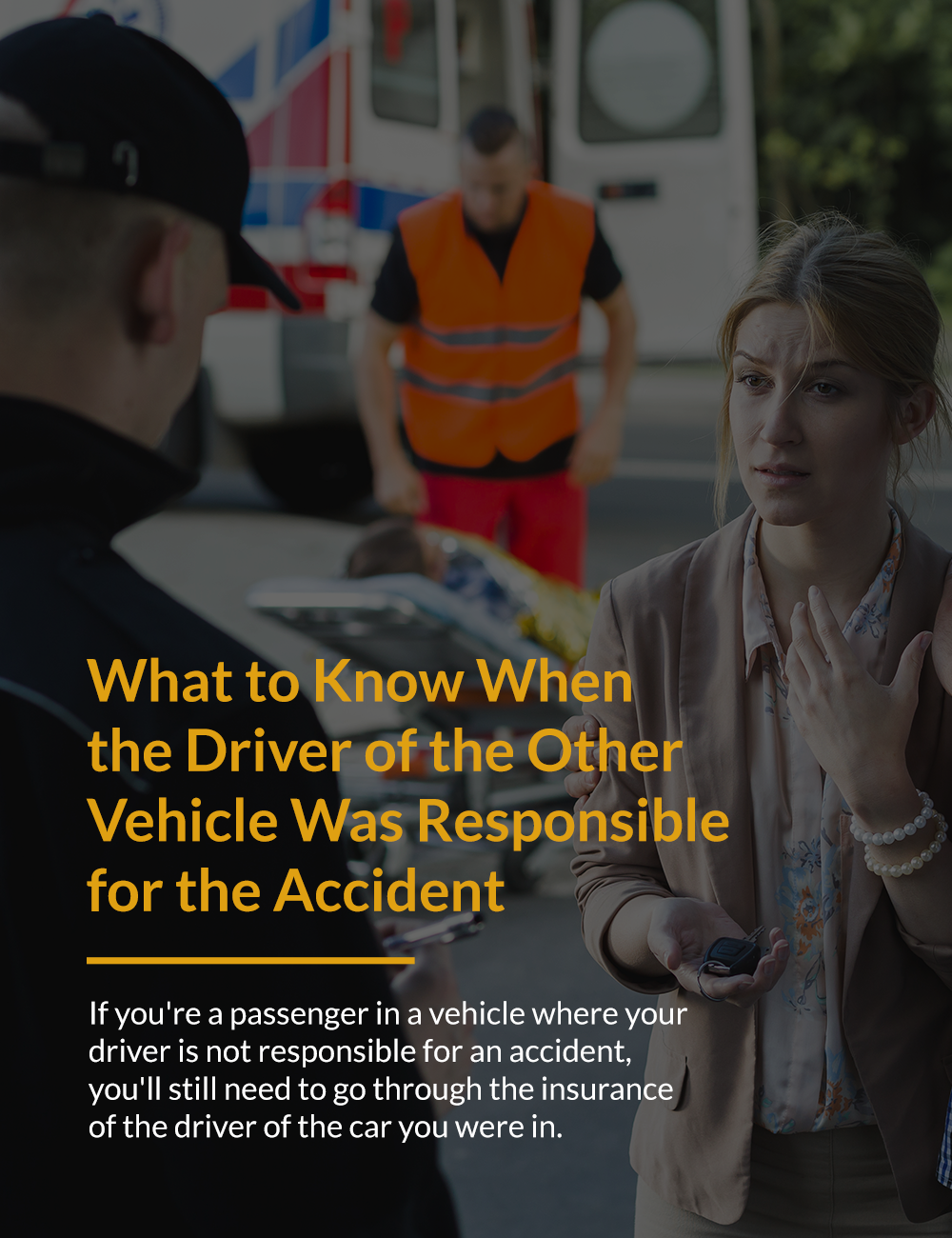 If someone is injured as a passenger in a car accident in Delaware, injured passengers will generally make their PIP claim under the car insurance policy of the car the passenger was riding in, per 21 Delaware Code Section 2118(a)(2)(c). This means that if you are riding in your friend's car, and you are hurt in a car accident, you'll make a claim under their car insurance policy to pay your medical bills.

Whether the driver is responsible or not, their PIP insurance will have to cover your medical expenses and loss of wages. If the driver has minimum insurance coverage, their insurance company will have to pay the passenger up to $15,000. As the minimum amount of coverage is fairly low, drivers are often counseled to purchase additional coverage to protect themselves from claims that come in at higher amounts.

If your bills exceed the driver's insurance and your own, you can make a claim for the full value of the excess medical bills against any at-fault driver.

If you're a passenger in a vehicle where your driver is not responsible for an accident, you'll still need to go through the insurance of the driver of the car you were in. This is due to the PIP system that Delaware uses, which makes the process for getting covered after an accident straightforward and simple regardless of which driver was at fault.

However, if you exceed the PIP of the driver of the car you were in and your own insurance, you can then make a claim for damages from the other driver's car insurance, which will include claims for excess medical bills and wages.

Can I Sue If I Was a Passenger in a Car Accident?

The short answer to the question is yes. You can sue if you are in a car accident as a passenger. Of course, there's more to the process you'll need to be aware of.

You can sue the party at fault. To determine the at-fault party, you'll need to start with the police report and a personal injury lawyer who can help you interpret the report. Depending on the facts of the accident, you may have the option to sue both drivers, regardless of fault.

Though some no-fault states limit and even preclude lawsuits over injuries incurred in a car crash, Delaware allows for passengers to sue.

As a passenger hurt in a car accident, you will have to prove the following in your car accident lawsuit:

Keep in mind that Delaware law allows for car accident victims to sue negligent drivers who have caused the accident. To determine how much a victim can receive from a driver, they will need to determine the driver's liability in causing the accident. If it's determined that one driver was 100% at fault for an accident, then that driver will owe the victim, or victims, 100% of the compensation.

If you're a passenger, you will likely have no liability in the car crash, so you should be entitled to 100% coverage. In other words, since you didn't do anything to cause the crash, whoever did have something to do with the crash will often be found responsible for covering costs resulting from the accident.

In case you are liable for a portion of the accident, you should be aware that since Delaware is a comparative negligence state, if you are found liable for more than 50% of the crash, you will not be eligible for coverage, per Section 10-81-8132 of Delaware state law. If you are partly at fault for the crash but not above 50% of it, you may be entitled to compensation from the primarily at-fault party.

For instance, if you're found to be 15% at fault for a crash, but another party is found to be 85% at fault, your compensation may go down by 15%. Though you should be aware of comparative negligence, if you are injured as a passenger in a car accident, you are likely to have not taken part in causing the accident. Most commonly, comparative negligence will come into play when two drivers have been involved in an accident.

How to Take Action

Once you have been in a car crash, you need to take a few steps detailed below:

Injured in a Car Accident? Reach Out to the Morris James Personal Injury Group

When you've been in a car crash, you may be immediately faced with debilitating injuries and financial hardships. You may not know where to begin getting fully compensated for all of your damages, especially if the at-fault driver's insurance company has denied your claim. The attorneys at Morris James Personal Injury Group specialize in this type of law, helping thousands who have been harmed in auto accidents, and can assist in seeing through a passenger personal injury claim in Delaware.

Contact us today to speak to a lawyer who is ready to assist with your case. All initial consultations are free, and we encourage anyone who thinks they may deserve compensation to get in touch with our attorneys.