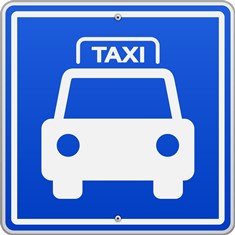 There are nearly a quarter of a million taxicabs in the United States. Every day, millions of people in cities across the country take taxicabs to get from one place to another. Whether they're tourists or commuters without vehicles of their own, people who rely on taxicabs for transportation expect to arrive at their destination safely. Likewise, motorists who share the road with taxicabs expect cab drivers to follow traffic laws and exercise appropriate caution behind the wheel. When a taxicab driver chooses to drive recklessly, they put the lives of their passengers and fellow motorists in danger, and the resulting crashes—and injuries—can be devastating.

Negligent drivers cause thousands of accidents and injuries each year. If you were injured in a taxicab accident in Delaware, here's what you need to know.

The two most common types of taxicab accidents are when a taxicab driver hits your vehicle and when you're a passenger in a taxicab that's involved in an accident with another vehicle. In both cases, if the cab driver was negligent, you may be able to pursue compensation for damages such as medical costs, vehicle repair or replacement expenses, loss of wages, pain and suffering, and more.

In taxicab accident cases, determining who should be named as a defendant in your personal injury lawsuit can be a challenge. Some drivers own their cabs, making them personally liable for the accident. Other times the driver rents the cab from an owner company, which could potentially make both the driver and the company liable. In some cases, the company that owns the cabs employs the drivers, making the cab company the liable party.

Cab drivers work long hours and even though they drive for a living, they may not be as careful behind the wheel when tired, rushed, or in a hurry to pick up their next fare. When riding in a taxicab, be aware of your driver's actions and watch out for negligent and dangerous driving behaviors that can cause accidents, such as:

While most of the injuries associated with taxicab accidents are similar to those sustained in any motor vehicle accident, factors such as broken or missing seat belts, and the presence of a partition between the passenger and driver, can exacerbate some impact-related injuries. Common injuries in taxicab accidents may include:

Do You Need a Delaware Taxicab Accident Lawyer?

Civil taxicab accident laws can be complex, particularly in cases where liability is in question. If you were injured in a crash caused by a cab driver’s negligent actions, you may be facing an uncertain future—wracked with worry over how you'll make ends meet while you recover. The experienced legal team with the Morris James Personal Injury Group understands how stressful life can be after an accident. Our firm can help you understand your legal option and determine if taking legal action is right for you. Contact any of our Delaware law offices today to schedule an appointment for a free, no-obligation consultation to discuss your case.